How After, Inc. Saved Polaris from a 34% Annual Premium Rate Increase (which would have had significant impacts on their Warranty Program) and Ultimately Helped Them Create Their Own Warranty Company

In After, Inc.’s Warranty Risk Management 101 Series, our goal has been to give you a basic understanding of this complex discipline.  In Part 1 we started by providing definitions for the key components of any Risk Management exercise.  In Part 2, we introduced examples of different structures that manufacturers and retailers can employ to control risk and manage liabilities related to their warranty programs – and pros/cons of each.  In Part 3, we outlined how to accurately estimate losses and illustrated how errors in Cost per Unit (CPU) calculations can significantly impact program profits.

In Part 4 – our final installment in the Series – we conclude with a case study on Polaris, a long-time After, Inc. client, who faced a potential rate increase (based on faulty insurance company forecasting) and other punitive measures that could have had significant financial impacts and made the Polaris Protection Plan (PPP) less marketable. Instead, with After, Inc.’s help, Polaris had all of the proposed program changes retracted and began a journey from having both their Warranty Risk and Claims Administration outsourced entirely, to administering their own claims, ceding risk to their captive insurance company, to finally creating their own highly successful Warranty Company.

Here is their story.

As the global leader in Powersports, Polaris Inc. (www.polaris.com) pioneers product breakthroughs and enriching experiences and services that have invited people to discover the joy of being outdoors since its founding in 1954. With 2020 sales of $7.0 billion, Polaris’ high-quality product line-up includes the Polaris RANGER®, RZR® and Polaris GENERAL™ side-by-side off-road vehicles; Sportsman® all-terrain off-road vehicles; Indian Motorcycle® mid-size and heavyweight motorcycles; Slingshot® moto-roadsters; snowmobiles; and deck, cruiser and pontoon boats, including industry-leading Bennington pontoons. Polaris enhances the riding experience with parts, garments, and accessories, along with a growing aftermarket portfolio, including Transamerican Auto Parts. Polaris’ presence in adjacent markets includes military and commercial off-road vehicles, quadricycles, and electric vehicles. Headquartered in Minnesota, Polaris serves more than 100 countries across the globe.

After, Inc. and Polaris began working together in 2010 for Missed Point of Sale (MPOS) marketing of the Polaris Protection Plan (“PPP”). [Learn how After, Inc. helped Polaris create a World Class Extended Warranty Marketing Business by reading the case study here.] 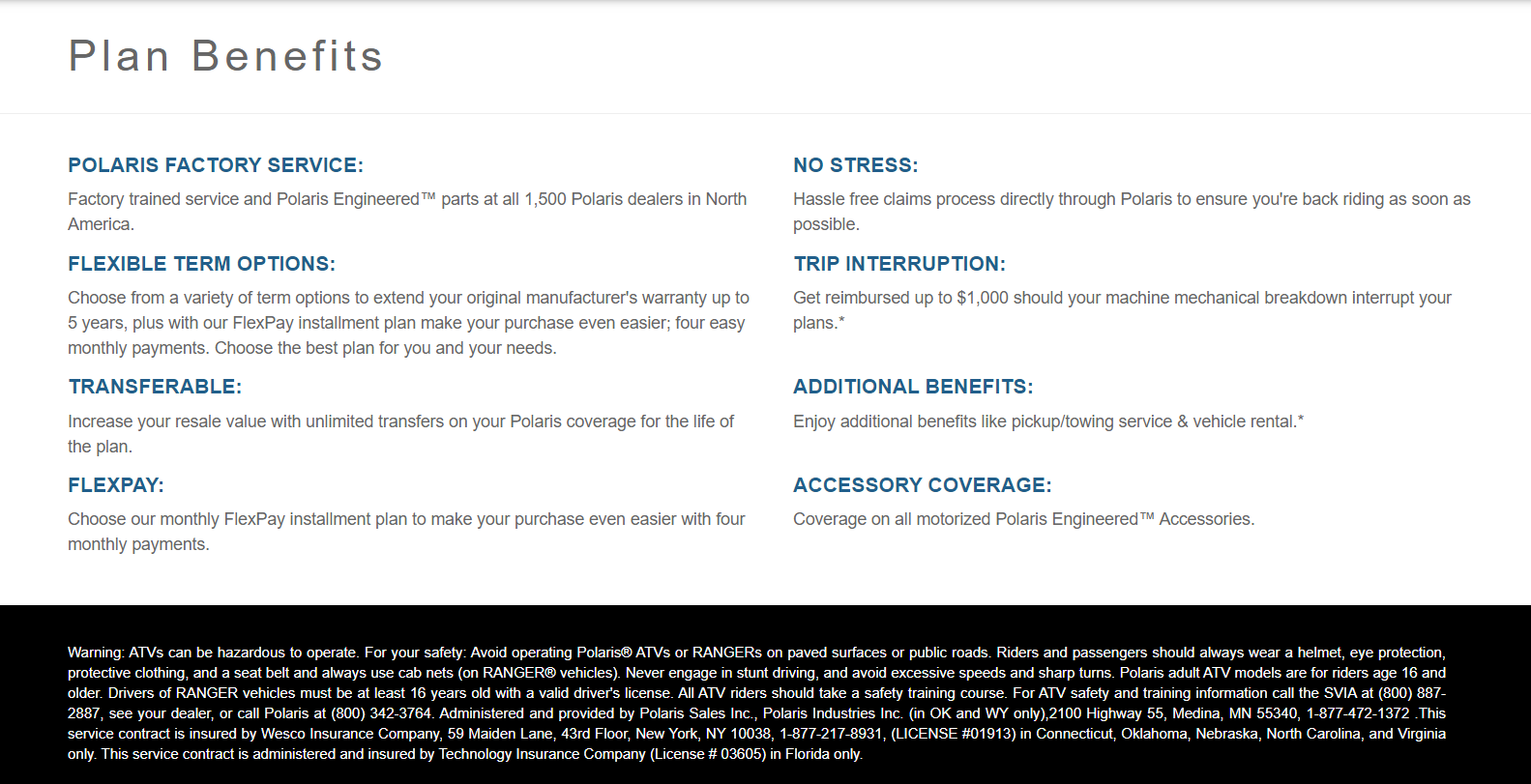 At that time, both the administration of the claims and the risk were outsourced entirely to a vertically integrated TPA/insurance carrier. In 2012, the carrier conducted an actuarial review, which led to a large, proposed rate increase and other punitive measures, including:

As we’ve stated before, if warranty risk is not accurately measured and becomes underfunded, prospective pricing and other measures are often not effective because the needed pricing and other actions can make the go-forward program unsellable.  Polaris was not in a position to absorb such dramatic rate increases and other measures; nor could the cost increases be passed on to dealers and customers, lest they opt for third-party service plans.  So, in the third quarter of 2012, with its PPP program at risk, Polaris contracted After, Inc. to perform an independent claims analysis.

Given After, Inc.’s extensive experience in Warranty Analytics – and using the quantitative methods we briefly described in Part 3 – we were able to uncover numerous errors in the carrier’s actuarial review.  The errors resulted from the typical ill-suited “insurance” methods for evaluating loss ratios (see Part 3), invalid assumptions about warranty lengths and earnings curves, and a failure to recognize changes in product mix and performance. 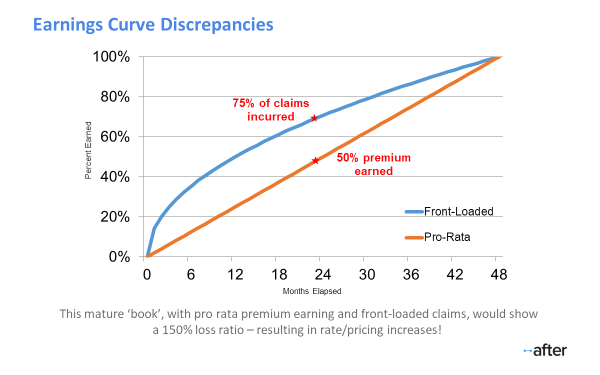 The graph above illustrates one of the errors we uncovered.  In simple terms, according to FASB and GAAP, premium can be earned either pro rata or according to a known claim emergence pattern.  Claims seldom emerge on a pro rata basis, but carriers often earn premium either pro rata or ‘modified pro rata’.  In this case, the carrier was earning premium on a modified pro rata schedule that was slightly skewed toward a front-loaded claim emergence – but not nearly enough.  The ‘Loss Ratio’, or claims divided by premium, is typically calculated by carriers as ‘Incurred Claims’ divided by ‘Earned Premium’.  A much more accurate forecast is achieved with the correct modeling methods to forecast total claim liability divided by total premium.  We almost always find significant errors in premium earning patterns.

In this graph – similar to what happened to Polaris – 75% of claims were incurred in the first 24 months of a four-year contract, and 25% in the second 24 months.  By using pro-rata earned premium with front-loaded claims, loss ratios will be overstated, leading to the erroneous belief that the Warranty Program is “running hot” and the carrier needs to increase premiums to compensate.  And the problem is compounded by the fact that in a mature program – where contracts are earning off at approximately the same rate as new contracts are sold – this problem will never be uncovered unless someone steps in and does the right analysis, or the seller stops doing business with the carrier and the book earns off with a large premium surplus).

In this case, not only did we find significant errors in premium earning patterns; but also when to start earning the premium (manufacturer’s warranty impacts – both timing and what the extended plan may cover over and above the manufacturer’s warranty); incorrect assumptions on future parts and labor costs (severity); no credit for engineering changes that resulted in lower claim frequency in two key categories; and other errors.

After, Inc. presented our findings to Polaris, and then accompanied the Polaris team to a meeting at the carrier headquarters.  After presenting our analysis, the carrier agreed that the rate increases were not warranted, and all proposed program changes were retracted.

Armed with After, Inc’s accurate analytics, reporting, and risk oversight, the Polaris team embarked on a warranty optimization roadmap.  In fact, the Polaris Team is a great example of using this type of analysis to embrace and drive change that put them in complete control of their program and the customer experience.

Over the course of nine years, we collaborated together to move Polaris from 100% outsourced risk and claims administration to its own Warranty Company, gaining full control over claim data, administration, underwriting profits, reserves, and the customer experience.  The timeline below outlines the journey.

After, Inc. and Polaris have built an incredible partnership over the past eleven years.  Together the companies have formed a partnership that uses best-in class analytics and applies the learnings to continue to improve Polaris’ warranty program.  In 2013, we signed a multi-year agreement to help Polaris steadily move up the Warranty Risk Continuum (see Part 2 in this Series for an explanation of the continuum), as well as perform quarterly risk reviews, ongoing analytical support and program optimization strategies – in addition to our ongoing partnership in PPP marketing.  Our continued risk oversight has saved Polaris millions of dollars, ensured that the problems of 2012 will never resurface, and guaranteed that the PPP program will remain stable with complete audit and FASB compliance.

After, Inc. (www.afterinc.com) has been offering Warranty Analytics, Program Marketing/Administration and Risk Management Consulting – including captive set-up and management – to top tier manufacturing clients for over fifteen years.  If you have any questions about Risk Management, feel free to reach out to us at https://afterinc.com/contact/.  We look forward to hearing from you!

After, Inc. uses predictive analytics in its Warranty Marketing Solutions to drive performance. Karen Clymer explains the top three modelling techniques we use most often and how to optimize on your extended warranty marketing campaigns.

In this third installment of a four-part series on risk management, Paul Swenson gives an overview of CPU forecasting and how CPU errors can significantly impact warranty Premiums, Reserves & Profits.

In this second installment of a four-part series on risk management, Paul Swenson covers various risk structures and how to start thinking of a risk roadmap when developing your program.